A Single Superphosphate (SSP) was the first commercial mineral fertilizer. It was thanks to it that the development of a modern nutritional industry for plants began. Until recently, SSP was the most commonly used fertilizer. 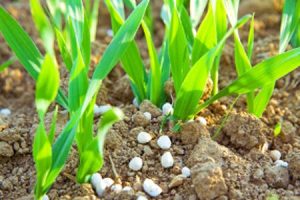 However, currently other phosphate fertilizers are produced (such as, for example, Triple Superphosphate), gradually replacing Single Superphosphate due to its relatively low phosphorus content. The finished SSP is a loose powder or granules of a gray colour. Its main components are monocalcium phosphate (Ca(H2PO4)2·H2O) and calcium sulphate (CaSO4·0,5H2O). Of course, Single Superphosphate also includes various admixtures, such as iron and aluminium phosphates, silica or phosphoric acid. All types of superphosphates contain the same components, which only occur in different proportions.

Superphosphates are the simplest and most commonly used phosphate fertilizers. They easily dissolve in water, which facilitates the absorption of phosphorus by plants. These types of fertilizers can be used on all types of soil and all types of crops, as well as on meadows and pastures, hence they are called universal fertilizers. They should be applied before seeding, preferably in combination with potassium salts, in the presence of which they are the most effective. Phosphorus is one of the most important nutrients for plants, and its deficiency is manifested by their rigidity and susceptibility to breaking, lack of gloss, there may also appear red discolorations on the leaves. It should be remembered that phosphate fertilizers mainly affect the quality of crops, not their abundance.

Raw materials needed for the production of SSP

For the production of Simple Superphosphate, phosphorite and apatite are mainly used. Phosphorites are sedimentary rocks of chemical or organic origin, consisting mainly of phosphates (they contain from 12 to even 40% of P2O5). In turn, apatites are minerals of primarily volcanic origin. Phosphorites are formed as a result of the calcium phosphate precipitation from seawater. The largest deposits of these rocks are found in North America, Ukraine, Russia and Algeria, Tunisia and Egypt. In Poland, phosphorites are found in the Bardzkie Mountains and on the outskirts of the Świętokrzyskie Mountains. Unfortunately, the exploitation of these deposits was discontinued in the 1970s. The other very important raw material needed for the production of superphosphates is sulfuric acid. Therefore, it is best if the sulfuric acid and superphosphate plants are located as close as possible to each other. This allows the elimination of the H2SO4 transport process, which is extremely difficult and expensive. Modern plants which produce phosphate fertilizers are usually built in the vicinity of installations producing sulfuric acid.

The preparation of SSP by the action of sulfuric acid on fluorapatite is a complex and multi-phase process. The reaction takes place mainly in the diffusion area. The first stage is the preparation of phosphate raw materials, which consists in the fragmentation of their grains to a size below 0.16 mm. Parallel to this process, dilution (up to about 68%) and cooling of sulfuric acid can be performed. Depending on the type of raw material used, the temperature of H2SO4 is varied. Typically, it is about 30-40°C for phosphate rock and about 60-70°C for apatite. The shredded phosphorous raw material is transported onto a scale and sucked into a continuous mixer.

Following this sulfuric acid is introduced. The next stage of obtaining Single Superphosphate is mechanical mixing of all ingredients. Already at this moment, the initial phosphorite distribution starts. After mixing, the contents of the mixer are transferred to a continuous reaction chamber, where the processes of setting and hardening take place. At a later stage, the superphosphate is ground and then stored at a temperature of about 35-40°C. The prepared mass “matures” for about 2-3 weeks and by that time the phosphate decomposition reactions are completed. During the ripening cycle, the free phosphoric acid content in SSP decreases, and the amount of P2O5 (which is very well absorbed by the plants) increases. Mixing the superphosphate in the warehouse further accelerates the processes.

The final stage is granulation of superphosphate. This is an extremely important process due to the fact that it affects the physical properties of the final product. The whole granulation stage takes place in rotating granulation drums. The powdered superphosphate is sprayed to moisturize it, and the rotation of the drum causes the formation of granules of various sizes. The prepared product, after the final drying is separated into fractions with different grain sizes and packed into paper bags. The phosphorus content in Single Superphosphate is usually 16-20%, expressed as P205.

Selection of construction materials for the superphosphate production process

In order to properly carry out the production process of superphosphates, it is important to choose the right construction materials of the apparatus. Due to the use of sulfuric acid and the presence of hydrogen fluoride in final products, the instrumentation used in this process must be acid-resistant. The production of Single Superphosphate is carried out in tanks lined with lead, hard PVC or Teflon. All coils used in this process are made of acid-resistant steel or lead (however, lead is no longer used in modern installations). In addition, it is very important to use anti-corrosion protection (e.g. rubber or faolite) due to the hydrogen fluoride emitted in the process.

Check similar articles
More from the PCC Group
How do air-entraining admixtures work? Surfactants in the production of concrete
Read more
Removal of old coatings with soda lye
Read more
How monolithic domes are created - a few facts about modern construction
Read more
Comments
Join the discussion
Cancel reply
There are no comments
Assess the usefulness of information
- (none)
Your rating
Newsletter
Stay updated