The industry has been using a lot of sulfuric acid for a long period of time. Due to the variety of applications, it is a mass-produced substance. Despite the stricter environmental standards and legal regulations, the production of sulfuric acid is not diminishing. 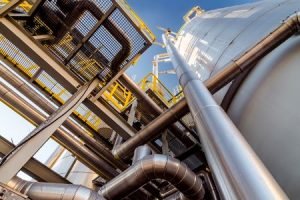 The constant demand for this chemical proves how indispensable it is for the global economy. H2SO4 is the corrosive blood of the industry, pulsating in countless production installations around the world. The sulfuric acid is handled by professionals operating in various industries. Scientists use it for numerous research and experiments, and with its help, students acquire knowledge in chemical laboratories. Today, it is difficult to imagine the functioning of the modern economy without sulfuric acid. Its properties make it an irreplaceable raw material and reagent, difficult to displace even by the most innovative chemicals introduced to the market by chemical manufacturers.

Characteristics and properties of H2SO4

Sulfuric acid is one of the most powerful mineral acids. It is an oily, heavy and colourless liquid with extremely strong hygroscopic properties. In its concentrated form it also has strong oxidizing properties. Sulfuric acid dissolves extremely well in water in all proportions, giving off a lot of heat. For this reason, when diluting it is absolutely important to pour the acid into the water, not the other way around. It is possible to produce sulfuric acid even at a concentration of 99%, however, the loss of sulfur oxide around the boiling point causes that an azeotrope with 98.3% water is produced. For this reason, concentrated sulfuric acid is usually stored in the form of a 98% solution. Of course, H2SO4 can exist in many concentrations. The most widely used aqueous solutions of sulfuric acid are:

– 77-80% – used in the process of obtaining H2SO4 by the chamber method and used for the production of Glauber’s salt, i.e. sodium sulphate (Na2SO4),

Sulfur combustion is carried out in excess of air in order to completely react at a pressure of about 0.5 MPa. The whole process is carried out at a temperature of about 150oC in tanks lined with a thick layer of fire and acid resistant brick. Molten sulfur is filtered to remove impurities (it is mainly iron and organic compounds). Often, lime is also introduced into the process, so as to reduce the acidity of molten sulfur, thus limiting its corrosive properties. Molten sulfur is pumped to the burner, where it is then burnt. The mixture of sulfur dioxide and air coming out of the burner is then passed through a filter and all impurities are removed.

In the next stage, sulfur dioxide is converted into sulfur trioxide by reaction with oxygen in the presence of a catalyst. The commonly used catalyst is vanadium pentoxide (V2O5), and dispersed potassium sulphate is used as its carrier. The support function of this catalyst is usually made of silica or aluminosilicates, which are characterized by a very high porosity, thus providing a large surface area for the reaction to proceed. The speed of the process is also dependent on the temperature. In practice, it is kept within about 500°C so as to ensure an adequate rate of reaction with the highest conversion possible.

Use of sulfuric acid

Sulfuric acid is also used in mining and metallurgy, where it is used in copper ore enrichment processes. H2SO4 is also an electrolyte in popular lead-acid batteries. In addition, sulfuric acid is widely used in the detergent industry (e.g. in the production of sodium lauryl sulfate) and in the cosmetics industry, where it is used for the production of raw materials and semi-finished products (e.g. silver nitrate), as well as hydrogen peroxide or fragrances.

Such a wide application means that in the absence of sulfuric acid it would be impossible or simply unprofitable to carry out many basic and extremely important industrial processes.

Sulfuric acid in the PCC Group

PCC Rokita has a stable position of a 77% sulfuric acid supplier. H2SO4 is produced in the Chlorine Business Unit by contact method, which guarantees very high purity and repeatability of the product obtained. The sulfuric acid offer presented by the PCC Group is addressed primarily to producers of phosphate fertilizers, paper and Glauber’s salt, i.e. sodium sulphate (Na2SO4). The latter product can also be used in the production of wood pulp, glass, dyes and detergents. Sodium sulphate is also used in medicine as a laxative.

Sulfuric acid is a raw material indispensable in many technological processes, and its extremely diverse market is on the verge of many challenges. Concerns about adverse environmental impacts can offset or even weaken the demand for this popular raw material. However, it is a fact that H2SO4, despite being present in chemistry for years, does not lose its popularity and is still one of the most necessary chemical raw materials used in the industry on a massive scale.