Which chemicals should be used to effectively extinguish fires?

Fire - a source of light and heat. It’s an origin on which the history of our entire civilization is based on. We have always approached the fire with great care from the oldest times, often without realizing the essence of its real threat. 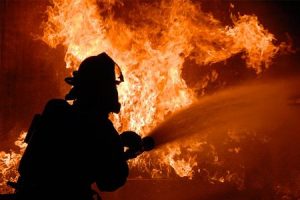 We do not really think about a situation when a fire breaks out in our surroundings, home or workplace. And even if this happens, we are convinced that a hand fire extinguisher will provide us with safety. That is why it is so important to use appropriate extinguishing agents, which are an extremely essential element of every building's equipment as well as means of transport. At this point, we should ask two very important questions - what makes the extinguishing agents so effective and are they really necessary for us?

The essence of fire chemistry

The fire chemistry is a group of special chemicals and preparations used to extinguish various types of fires. During the spreading of the fire, the speed and efficiency of the operation is of key importance. Different type of extinguishing agents are required when fighting a fire in your own home or office, and other in a chemical plant where flammable materials may be used. That is why it is so important to choose the appropriate extinguishing agents for the threat with which we might face.

Foam - the mechanism of its operation

The foam contains a number of components that directly determine its physicochemical and functional parameters. Surfactants, which allow the formation of high and stable foam, play the most important role. Foam concentrate is primarily intended to cut off the access of oxygen to the fire, which prevents its further spread. Moreover, the water contained in the extinguishing foam, is gradually released from it and its purpose is to cool the burning solids or liquids. In addition, in case of a fire of liquid substances, the foam concentrate prevents their further evaporation, which significantly reduces the time of fire extinguishing.

Appropriate selection of the composition of the extinguishing mixture is therefore an issue as important as its proper operation. The PCC Group has a wide range of foaming agents for extinguishing applications, including surfactants that play a major role in the formation of foam. These are products for example ROSULfans, i.e. salts of sulfated fatty alcohols, their ethoxylated derivatives offered under the name SULFOROKAnols, as well as products that support the long stability of foam, such as ROKAmin series.

Of course, synthetic extinguishing agents that produce mechanical foam should be also mentioned. They are intended for extinguishing class A and B fires using tap water (Roteor M3SP), and some of them also using seawater (Roteor M3 Premium). These products are characterized by high foam stability and burnback resistance. In addition, Roteor products contain corrosion inhibitors, freezing point depressants and foam stabilizers. The great advantage of this series of products is their easy biodegradability and low toxicity to the aquatic environment.

There are also places and types of fires where the presence of water is not desirable. These include, among others, the vicinity of electrical equipment or areas where materials easily damaged by water are stored. In such cases, water cannot be used to form foam. For this reason products such as fire extinguishing powders and various types of gases (e.g. carbon dioxide) are used.  They work in a similar way to the extinguishing foam, i.e. they cut off the flow of oxygen to the fire by forming a coating (powder) or cloud (gases), and also exhibit chemical inhibitory effects when extinguishing a fire. Unfortunately, they also have disadvantages - among others, they show difficulty when using in unfavourable weather conditions, such as strong wind.

When choosing fire extinguishing agents and the type of fire protection, our safety should be the highest priority. Therefore, it is important to use the methods and solutions that are most appropriate in a given situation, which will effectively protect our health and life.