What is the periodic table of chemical elements?

In chemistry classes at primary school, we learn about the existence of different elements. They are everywhere, in the air, food, soil, water and rocks. We can say that they surround us on all sides. The collection of all elements discovered to date is known as the periodic table. What is the periodic table of elements? How do we read the information on the periodic table? You will find the answers to these questions in the article below. 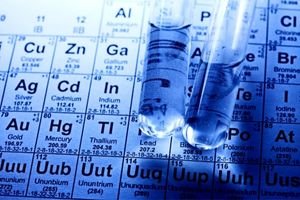 The structure of the periodic table is the result of multi-century experiments and observations from around the world. The essence and importance of chemical elements was already puzzled over by the Greek philosopher Aristotle more than 2,000 years ago! Ancient man knew different elements, such as carbon or sulphur. In the following centuries, the knowledge about them was expanded. However, only as late as in 1869 Dmitri Ivanovich Mendeleev, a Russian chemist, decided to organise the available information and developed the periodic table of chemical elements. Mendeleev’s periodic table, as it began to be called, quickly became the key point of reference for researchers and chemists.

Mendeleev was the first researcher in history to discover the periodic law of elements. He believed that the properties of elements in the periodic table changed along with the atomic mass, and that the neighbouring elements, arranged by the growing atomic number, indicate certain similarities. This was a landmark discovery that revolutionised the image of the continuously developing science of chemistry. Mendeleev’s periodic table can be seen in virtually any school chemistry lab, being the foundation of contemporary knowledge of chemistry. So let’s check how to read the periodic table to acquire as much information as possible.

Interactive Periodic Table of Elements
Enter the interactive world of chemistry with us!
Visit 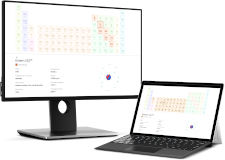 The first Mendeleev’s table did not resemble the table of chemical elements that we use today. It was a descriptive table of the elements, simple in form and including several dozen elements. How many elements are included in Mendeleev’s periodic table in the 21st century? Presently the  periodic table consists of 118 elements, which are classified into the following groups:

The periodic table also contains elements that are still subject to research and are classified into the group of elements with unknown properties (these include, for example, the transuranic Moscovium and the synthetic Oganesson that does not exist as a natural, earthly deposit).

When we search for the periodic table of chemical elements for printout, we can also find a simplified diagram that only covers metals and non-metals. It indicates that the vast majority of elements are metals (including precious metals) having the form of solids, such as copper, zinc, magnesium or gold. Mendeleev’s table also includes non-metallic gases and liquids, examples being nitrogen, chlorine, and iodine.

How to read the periodic table of elements?

If we take a closer look at the table, the information it contains should be easy to read even by a layperson. The periodic table consists of groups and periods that contain elements, and the position of these elements translates into their particular characteristics. Since we already know the basics, let’s answer the following question: where is the group and where is the period? Besides, what do the data placed by each symbol indicate? In short, how to read the periodic table?

The horizontal lines are called periods, while the columns are defined as groups. The group numbers tell us how many valence electrons the elements have. So what is a period in the periodic table? The numbers of periods express the quantity of atomic electron shells (the fewer shells, the simpler the atomic structure of the element).

Based on the system designed, each individual field in the table of elements may contain the following information about the element:

In some versions of the periodic table of elements indicating the valence, we can find even more information referring to particular properties, such as the boiling and melting points. We encourage you to download one of the latest versions of the periodic table of elements (PDF, educational Mendeleev’s table for printout), which has been prepared by PCC Group experts. You are also invited to visit the interactive version of the periodic table, available at PCC Group’s Chemical Academy.

How important is Mendeleev’s periodic table?

Mendeleev’s table with names and descriptions of the elements continues to inspire researchers and explorers. This structured table of elements allows us to understand the relationship between the structure of atoms and the properties of substances. It has made it obvious that mankind has not yet discovered (or created) all possible elements. The periodic table keeps expanding. Scientists acquire information on resources and raw materials that may be important for economies and the future of the generations to come.

Table of Contents
Check similar articles
More from the PCC Group
TOP 10 discoveries and events in chemistry in 2022
Read more
Zinc hydroxide: amphoterism, preparation, applications
Read more
What is copper sulphate and what are its applications?
Read more
Explore the world of green chemistry with the PCC Group
Read more on the PCC GREENLINE® blog
Biomass – advantages and disadvantages
Read more
PCC Group – green energy in surfactant production
Read more
What is chemical recycling and what are its benefits?
Read more
Comments
Join the discussion
Cancel reply
There are no comments
Assess the usefulness of information
- (none)
Your rating
Newsletter
Stay updated