The greatest difficulty during the paint production process is thorough mixing of all its components. Modern paints contain a number of substances, such as adhesives, pigments, thinners and various modifying additives. To ensure accurate and even distribution of all ingredients, it is necessary to use appropriate dispersing agents. 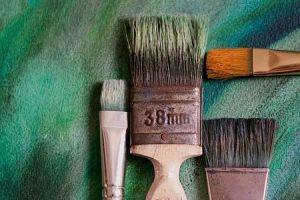 Their amount in the whole composition is very small and yet crucial (usually does not exceed 1% of the composition of the paint). Dispersing agents ensure the consistency of paint and give it the desired properties, such as the strength of colour, or appropriate pigmentation and compatibility of the finished product.

Preparation of an aqueous pigment concentrate

The preparation of an aqueous pigment suspension is a multi-step and relatively complicated process. The first phase is the wetting process. It consists of displacing the air contained in pigments molecules by water. In the second stage, large pigment agglomerates are broken down into smaller particles under the influence of high shear forces. The last phase is the stabilization of small, dispersed particles, so as to avoid re-agglomeration as a result of the flocculation process. All stages of the preparation of the aqueous pigment concentrate are carried out in specially designed devices called dissolvers, which thanks to the smooth speed control and the use of a venting system are perfect for the production of all types of paints and varnishes. In order to ensure an appropriate degree of dispersion of the pigment in the aqueous concentrate, dispersants are used, especially in the first and third stage of the process.

Types and role of dispersants in the aqueous pigment suspension

Dispersants are extremely important during the wetting process. They allow the reduction of the surface tension of water, thus facilitating its penetration into the spaces between the pigment particles. In turn, during the stabilization step, the dispersants settle on the surface of the pigment, thus ensuring the required durability of the entire system.

In order to eliminate the above mentioned negative traits, there have been developed dispersants of the newer generation. These include surfactants with a complex polymeric structure – for example properly modified acrylic, styrene, ethylene, propylene copolymers and many others. ROKAmer 1010/50 is an example of a water-soluble dispersant with such chemical structure. It is a high molecular polymer with a specific bifunctional structure, which means it has two hydrophilic groups. In addition, ROKAmer 1010/50 does not have a cloud point in the water, so it creates clear solutions even at high temperatures. Due to its copolymer structure, it also has anti-foaming properties, which is an extremely desirable feature when creating emulsions for use in the paint and varnish industry. In turn, EXOdis PC30 is a polymeric ionic dispersant used in water-soluble formulations. This product provides excellent final stabilization, even at very low concentrations. EXOdis PC30 provides the effective introduction of pigment into the system by significantly lowering of the viscosity of aqueous suspensions of titanium white and mineral fillers. Another group of polymers having excellent dispersing properties are the compounds of sodium salts of naphthalene sulfonic acid with formaldehyde. An example of such products is the Rodys series (L and LP). These products allow time-stable aqueous dispersions to be obtained with the desired physicochemical properties. They are characterized by low concentration of free formaldehyde and naphthalene and allow very low concentrations of coagulants of dispersed particles to be obtained.

Advantages of using dispersants and their wide range of applications

Such a huge diversity of polymer compounds makes the potential of designing their structures virtually unlimited. Of course, this also translates into the ability to choose the right polymer depending on the specific application. The choice of the right dispersing agent not only guarantees the very stability of the final dye product, but also a number of other features. Dispersants improve the key properties of paints and varnishes, such as opacity, transparency, gloss, colour strength and even scrub resistance.

PCC Exol SA was the first in Poland to start research on the development of surfactants with a special polymeric structure, which can be used as specialized dispersing and wetting agents with a wide range of applications in the industry. After appropriate modifications, the newly formed dispersants may be used as, for example, demulsifiers in oil processing, dispersants of active substances in the agrochemical industry and wherever strict restrictions on the stability and application properties of the composition have to be met.