Cities safer thanks to disinfectants?

The World Health Organization recommends disinfectants to fight coronavirus. At the moment, this is the only way to reduce the risk of further illness. Is it really effective? 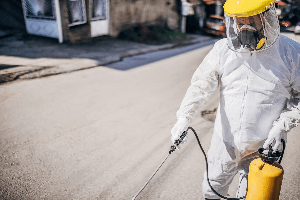 The Małopolska Centre of Biotechnology of the Jagiellonian University, in cooperation with the city authorities of Krakow and the city guard, conducted research. The aim was to determine the degree of environmental contamination with SARS-CoV-2 virus in Krakow.

The genetic test ‘Real-Time Fluorescent RT-PCR Kit for Detecting SARS-2019-nCoV’ from BGI Genomics Co. Ltd. was used for the tests.  The test was chosen because of its high effectiveness. It can detect even single copies of the virus. It is used i.a. in Germany, where it is used to test samples taken from patients.

Samples from locations with high levels of human traffic were used to conduct environmental testing. Swabs downloaded i.a. from the surface of ticket machines and ATMs located at stops and at shopping malls. The performed determinations were qualitative, not quantitative, however, the characteristics of the results of the tested samples indicated the presence from few to several copies of the virus, rather than several hundred or more.

Tests conducted in mid-March showed the presence of viral genetic material in over 40% of the samples. This was the period when the virus was accumulating on the surface for several days. Research carried out in the following weeks brought more and more optimistic results. Tests carried out at the beginning of April obtained a result where only one sample among the subsequent collections carried out on a given day was positive.

The obtained  results indicate that the virus is present incidentally, while a sick person is present in the area. It can therefore be concluded that it is not constantly present in public space. Researchers emphasize that the positive results are the consequence of the steps taken by the city. First place was regular disinfection of the city’s public spaces.

Conducting such tests proves the effectiveness of using disinfectants. Cities should especially ensure regular disinfection of places with high traffic. Public places are visited every day by hundreds or even thousands of people.

The World Health Organization recommends the use of preparations based on sodium hypochlorite and 70% ethanol. It is worth using ready-made preparations available on the market, which have appropriate documentation and will be safe for us. The PCC Group offers a whole range of surface disinfectants, i.a. also to public places. They are distinguished by proven bactericidal, virucidal and fungicidal effects, within one minute after application. We encourage you to familiarize yourself with the offer!

Check similar articles
More from the PCC Group
Plastic packaging - convenient and versatile storage of products
Read more
Personal care products - the first step in daily care
Read more
Coronavirus in the air, on shoe soles, floors and other surfaces
Read more
Comments
Join the discussion
Cancel reply
There are no comments
Assess the usefulness of information
- (none)
Your rating
Newsletter
Stay updated