Even though photovoltaic systems and solar thermal collectors have been in widespread use in Poland for quite some time, many prospective investors continue to confuse these two systems that are based on different operating principles. For many people, the popular solar panels and photovoltaics are the same thing – we will explain why this assumption is wrong. 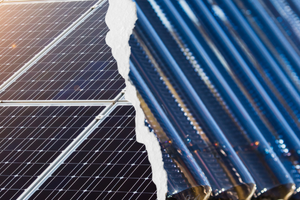 In this article, we will focus on the similarities and – above all – the differences between photovoltaic technology and solar thermal collectors. Find out how the two systems work, learn the secrets of their design and operation, and discover which system is better: solar panels or photovoltaics?

First, we will look at the similarities between photovoltaic panels and solar thermal collectors. Many people confuse them because both solutions are installed on building roofs and at ground level, using structures designed for this specific purpose. Another similarity between the two solutions is that they use solar energy.

What is the difference between photovoltaics and solar panels?

This is, however, where the similarities end because solar thermal energy is absorbed by the two systems for completely different purposes. Photovoltaic panels are installed for the conversion of thermal energy into electricity, while solar panels convert solar radiation into heat. This is why these solutions do not compete with each other. Instead, they may complement each other.

How do solar thermal collectors work?

You already know what the difference between photovoltaics and solar panels is. Now, it is time to look at the design of the two systems. Solar thermal collectors absorb the solar radiation that reaches the absorber, which transfers energy to the medium, usually a water and glycol solution. The medium supplies the exchanger with heat in the form of hot water. Like photovoltaic systems, the popular solar panels operate most efficiently when the system is directed to the south. However, unlike PV panels, solar thermal collectors feature significant restrictions as they only operate when it is sunny, and this leads to significant heat losses on cold and cloudy days.

At present, there are two basic solar thermal collector types: flat and vacuum. Due to the climate conditions in Poland, both types operate most efficiently from April to the end of October, when the level of insolation is the most intensive.

Flat photovoltaic collectors are somewhat similar to PV panels from the outside because the solar energy absorber is shaped like a flat metal plate. From the bottom, it is connected with a pipe system, in which the medium that heats the hot water stored in the tank circulates. The foundation of efficient operation of the entire system is adequate thermal insulation, made of mineral wool.

In turn, in vacuum collectors, the absorber is not an integrated whole, but it is divided into components placed in separate vacuum pipes. Each pipe is connected to a bus, in which the heating medium circulates that transfers the heat from the sun to the water stored in the exchanger.

What is stagnation in collectors?

When solar panels have not returned heat to water for a long time, intensive insolation may cause stagnation or leakage. This type of defect does not occur in photovoltaic panels because these are completely different systems. 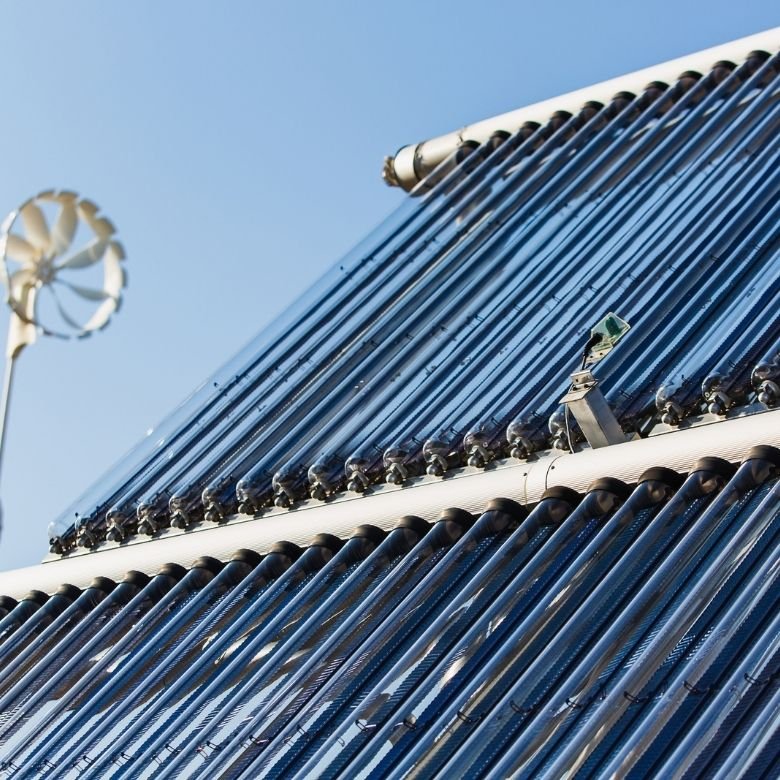 Solar panels vs. photovoltaic panels: what is the operating principle of PV panels?

To understand the difference between solar panels and photovoltaics, it is also required to know the operating principle of the PV system. Solar panels are made with silicon, absorb solar energy and convert it into electricity. The energy obtained in this manner may be used to supply all types of household, office, industrial or agricultural systems and equipment. As we can see, the application scope of photovoltaics is much wider than that of solar thermal collectors, which are used primarily to produce domestic hot water.

The parameters of the electricity generated by the panels are adjusted by the inverter, which is another mandatory component of every system. The inverter converts direct current into alternating current, that is the current in the outlets of household systems. What is very important, the photovoltaic system operates not only on sunny days but throughout the year, also when the insolation is lower. The surplus energy generated in the summer is transferred by the prosumer to the power company to “recover” some of the stored reserves in the fall and winter months, when the photovoltaic system is less productive. This significantly reduces electricity bills.

When asking the question: solar panels or photovoltaics, it is worth focusing — as in the case of solar thermal collectors — on the PV module types available on the market. They are divided into monocrystalline and polycrystalline.

As suggested by the name itself, they are made of monocrystalline silicon, and their color may vary from dark blue to black. They are produced by cutting silicon crystals and feature characteristic beveled corners. They are distinguished by good resistance to mechanical damage and extreme temperatures, in addition to being highly efficient.

This type of panel is made of polycrystalline silicon produced from numerous mono-crystals. It is characterized by a light blue color and distinctive crystal edges. The cells, however, are square-shaped. Polycrystalline photovoltaic panels are considered less efficient and more vulnerable to high temperatures. Nonetheless, they are popular due to being less expensive than monocrystalline modules. 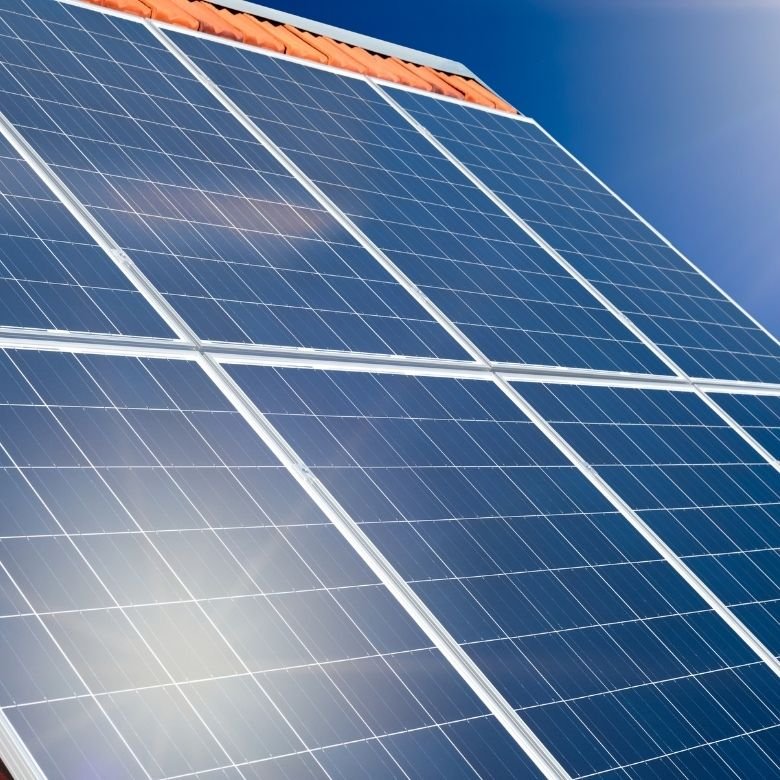 When comparing such technologies as solar panels and photovoltaics, it is worth considering the strengths and weaknesses of both solutions. As you already know, solar thermal collectors are not as versatile as photovoltaic systems, which are used not only to heat water but also to supply various electrical equipment with free electricity from the Sun.

Solar panels vs. photovoltaic panels – costs of purchase and operation

Another aspect of the photovoltaic panels vs. solar thermal collectors comparison is the question of the operating costs of the two systems. The initial cost must be considered in both cases; however, solar panels tend to involve lower costs than photovoltaics. The final cost of the investment depends on several factors, including: the type and number of cells used, the total capacity of the photovoltaic system, or the amount of heat to be supplied by the solar thermal collector. It is also worth remembering that flat collectors are less expensive than vacuum collectors, and polycrystalline panels are less expensive than monocrystalline cells.

Although both systems are practically maintenance-free, the operating costs must include the cost of the annual inspection of the system, maintenance, and of the replacement of used cells or batteries. From the economic perspective, the payback period is crucial. Depending on the type of the system and whether the purchase was supported by an external subsidy, an investment in solar panels and photovoltaics may pay back within several or dozen or so years. You already know the difference between photovoltaics and solar panels and the strengths and weaknesses of both solutions. Now is the time to consider when it is wise to choose solar thermal collectors and when the photovoltaic system is better. If:

the investment in photovoltaic collectors is a good idea. However, if your priority is to become independent of the grid electricity supply, to lower electricity bills and to find an eco-friendly renewable energy source, which could be used for different purposes, consider investing in a residential photovoltaic system.

As you can see, the answer to the question: which one is better – solar panels or photovoltaic panels, depends to a large extent on the individual needs of each investor. A crucial aspect of the decision-making process is the detailed specification of the usage of the solar system, as well as the cost-benefit analysis. The installation of solar thermal collectors enables producing domestic hot water in the summer without using heating equipment. In turn, a residential photovoltaic system enables using electricity throughout the year and storing the surplus generated electricity in the grid. Regardless of your final choice, it should be carefully thought through.

Table of Contents
Check similar articles
More from the PCC Group
Environmental pollution – why are we fighting CO2?
Read more
Operating lifetime and disposal of solar panels
Read more
Green Internet – How Do Optical Fibres Help Protect The Environment?
Read more
Explore the world of chemistry with the PPC Group
Chemical curiosities and product innovations from the PCC Group
What is the ionic dissociation of acids?
Read more
Advantages of rail transport
Read more
Sorbents – what are they and what are they used for?
Read more
Comments
Join the discussion
Cancel reply
There are no comments
Assess the usefulness of information
- (none)
Your rating
Newsletter
Stay updated