Concrete – a mixture of raw beauty and a miracle of technology

One of the reasons why concrete is such a popular building material is its robustness. It also lends itself to creating interesting shapes and forms, and is therefore increasingly often used by architects for decorative purposes. 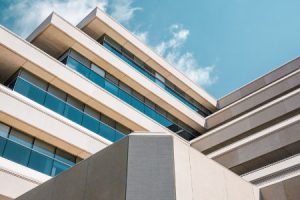 The ongoing development of this material is possible thanks to specialised chemical additives that improve its performance, safety and durability. But let us go back to the beginnings of concrete and trace its history – how was it created, who invented it, when was cement first produced?

The Egyptian pyramids are undoubtedly among the largest ancient buildings. Their size, shape and the precision, with which they were constructed, have led many researchers to wonder how exactly they were built. One of the theories suggests that the ancient Egyptians knew concrete and used it in construction, which would mean that this material was invented much earlier than we think.

Is it possible that the origins of concrete go so far back that it was used to build the pyramids of Egypt? If so, this would be two thousand years before the creation of the first Roman concrete structures. As it turns out, a number of studies have been carried out in the last couple of decades, the results of which have proved controversial. They are concerned with the method of production of the stone blocks used to build the Egyptian pyramids. Those studies are still ongoing and aim to discover indisputable evidence to confirm or disprove the thesis that concrete was used to produce huge blocks, the largest of which weighs about 50 tonnes. The evidence collected thus far does not confirm the “concrete theory” in an obvious and indisputable way. Therefore, it is still thought that this construction material was invented in Ancient Rome.

Concrete was used by the ancient Romans as early as the 4th century BC. Initially, they employed a technique whereby rubble and loose mortar would be inserted between two walls. After about a hundred years they perfected this process, creating mixtures that resemble concrete as we know it today. Romans prepared cement using lime mortar and volcanic ash. This second ingredient was widely present in the Mediterranean, where the Greeks pioneered its use. Thanks to the ash, which they transported from the base of Vesuvius, the ancient buildings have survived to this day - the volcanic ash made the concrete waterproof.

The most famous ancient concrete construction is the Pantheon – a Roman temple in the shape of a rotunda, covered by a dome. It was built between 118 and 125 AD. It is estimated that the dome itself, with a diameter of 43.3 m, weighs about 5 thousand tonnes. On the one hand, this shows the scale of the undertaking, and on the other – the technological advancement of the constructors working almost 2 thousand years ago.

The invention of Portland cement

Few events connected with the development of construction works have been recorded since the times of ancient Rome. It was only in the 19th century that a significant turning point came, as concrete became widely used as a construction material. This was brought about by the invention and patenting of Portland cement in 1824. The inventor is said to be the Englishman Thomas Aspdin, who gave an account of his many years of experiments with creating cement in his work entitled, “An Improvement in the Modes of Producing an Artificial Stone”. In this text, the author uses the name “Portland cement” for the first time, as an analogy to stone from Portland - one of the best and most expensive construction materials in Great Britain at the time. The name caught on and still functions today.

Concrete Poland – the beginnings of the cement industry

Poland was one of the first countries to begin the industrial production of cement. The cement factory opened in 1857 in Grodziec was, at the time, the fifth such site in the world. The factory's productivity was just short of 500 tonnes annually. The production process consisted in burning clinker in shaft furnaces and subsequently grinding it in stone mills. It was only in 1911 that the production technology was changed and rotary kiln incinerators were introduced. They proved much more efficient and could increase production to 150 tonnes per day.

Currently, in Poland, concrete brings little inspiration. Used by house-building companies in the 20th century to produce reinforced concrete prefabricated components and build ugly and faulty blocks of flats, it became synonymous with mediocrity and the hopelessness characteristic of that era. Today, concrete and cement are associated with big road investments which connect the east with the west and the north with the south and which are symbols of the changes that our country went through not that long ago.

The modern face of concrete – specialised chemistry for construction

Concrete is still the most widely used building material. With advanced technology and innovative admixtures, the properties of concrete are continuously being perfected and its range of use broadened. Various processing additives play an important role in the production of concrete. The use of chemical admixtures is necessary in the production of ready-mixed concrete and in the concrete prefabrication industry, as well as in the production of setts or other small concrete elements. Moreover, we increasingly often hear of high-performance concrete, self-consolidating concrete, polymer-cement concrete or fibre-concrete, i.e. concrete reinforced with fibres of various kinds.

Thanks to new technologies in the production of concrete, with the use of concrete and mortar additives, its range of application in the construction industry is almost limitless. Manufacturers play an important role in the development of concrete - they offer additives and admixtures, create innovative products used to modify mixtures and mortars, and improve the durability and safety of ready concrete products. The PCC Group portfolio has much to offer to the construction industry, including emulsifiers, dispersants, plasticisers, superplasticisers and wetting and fluidising agents. The dedicated product offer for this industry is in constant development, and the new products are addressed both at manufacturers of construction materials and at construction companies who provide a wide range of services. Due to its diversification, the construction industry is an important direction of development, as it has an increasingly significant influence on the development and strengthening of the company's position on the Central and Western European markets.