Chemical compounds called acids are commonly found in nature and in the human body. Their characteristic feature is that they contain easily-dissociating hydrogen atoms. Acids can be classified as organic and inorganic. The organic group includes, among others, lactic acid. What is lactic acid? What are its properties and applications? You will find answers to these questions in this article. 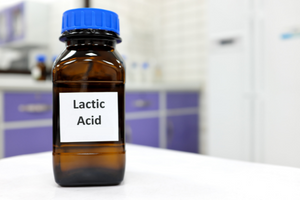 What is lactic acid?

Much has been written about lactic acid. The name of this compound comes from the curdled milk in which it is found. Chemists also refer to it as hydroxy acid, α-hydroxypropionic acid, or 2-hydroxypropanoic acid. It can also be found under several other names such as: lactic acid or acidum lacticum.

What are the features of lactic acid? The molecular formula of the compound is: C3H6O3. It belongs to the group of hydroxy acids, which means that in its structure it contains one carboxyl group and one hydroxyl group.

Lactic acid is a compound that we get to know in early childhood. It is found, among others, in popular food products, such as:

Lactic acid is also naturally produced in the muscles under hypoxia and when the body is exhausted due to intense physical activity. This applies to both the human and animal organism. Under the influence of intense movement in the muscles, glycolysis occurs, i.e., the breakdown of a polysaccharide called glycogen, which provides the body with the necessary vital energy.

In laboratory conditions, lactic acid can be obtained by fermenting sweet solutions using bacteria – lactobacilli. How do I get a sweet taste of the solution? For this purpose, lab technicians often use sucrose, various types of starch or starch syrup. Chemists use calcium carbonate to neutralise the acid formed.

How to recognise lactic acid? Lactic acid’s physical properties, such as its distinct, sour taste and odour of whey make even a layman able to recognise this compound. A-hydroxypropionic acid can occur in two forms:

What other physical and chemical properties does lactic acid have? Manufacturers and specialists in the cosmetic and beauty industry willingly reach for lactic acid. The chemical and physical properties of this compound have been known and appreciated for generations! This organic acid is a component of cosmetics, peelings, capsules, globules and preparations with regenerating and moisturising effect.

In modern cosmetics, there is a shift towards natural substances. No wonder that the interest in lactic acid, which belongs to the group of the highest-quality antioxidants, is growing significantly. As a cosmetic additive, the acid works in multi-purpose fashion:

People have appreciated the beneficial effects of lactic acid for years. The compound contained in pickles and milk products has a very positive effect on the function of the human body. Thanks to its presence in the body, the amount of pathogenic bacteria is reduced and metabolism is accelerated, which improves the general condition and increases appetite. Lactic acid facilitates the absorption of calcium and iron. Effective absorption of minerals contributes to the improvement of the condition of bones, muscles, joints and the cardiovascular system.

What other effects does lactic acid have? In addition to its detoxifying function, it also has antioxidant properties. It is a natural preservative and acidity regulator that gives food products a specific flavour and aroma.

What is lactic acid used for?

The physical properties of lactic acid and its versatile action are appreciated by producers of many industries: cosmetic, pharmaceutical, food, bee-keeping, tanning and chemical. In production and processing plants, food-grade lactic acid is known as E270. Where can you find it? It is found, among others, in such products as:

Lactic acid is also an ingredient of:

As a natural tanning agent, lactic acid is also used for fur tanning and to treat textiles.

Lactic acid is one of the oldest acids known and researched by man. For the first time, a controlled release of lactic acid from the muscles was performed under laboratory conditions in 1806 by Jöns Jacob Berzelius, considered as one of the greatest Swedish chemists in history.

Due to its antioxidant and antibacterial properties, physicians use acidum lacticum in the prevention of neoplastic diseases. A diet enriched with pickles and products containing natural lactic acid is now recognised in many countries as one of the most effective methods of counteracting diseases such as diabetes.

Table of Contents
Check similar articles
More from the PCC Group
What should you know about the use of vitamin c in cosmetics?
Read more
What should the pH of drinking water be?
Read more
Everything That Is ‘Halal’ Is Not ‘Haram’
Read more
Explore the world of green chemistry with the PCC Group
Read more on the PCC GREENLINE® blog
How is rainwater collected? Useful information and tips
Read more
What electronics contain the most gold? Recovery of noble metals from electronics
Read more
Green energy and everything you need to know about it
Read more
Comments
Join the discussion
Cancel reply
There are no comments
Assess the usefulness of information
- (none)
Your rating
Newsletter
Stay updated