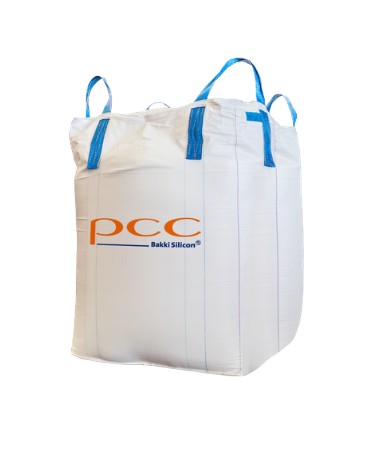 Microsilica is a by-product of silicon metal production. This is a densified amorphous powder, obtained by the metallurgical process of silicon in an electrical arc furnace. It is used as an additive to improve the properties of concrete and mortar formulations.

Silica particles are about 30 to 100 times smaller than cement grains and consist almost entirely of amorphous silicon dioxide (SiO2).

They fill a part of the pore space (micro-filling effect) and support the increase in strength through a pozzolanic secondary reaction.

In addition, the corrosion protection for the reinforcement or the resistance against water penetration can be improved.

It is also used in the fields of refractories, granulated fertilizers (coating) and in the production of plastics and adhesives.

Silica dust – so-called micro-silica, which is a by-product of the production of metallic silicon and ferrosilicon alloys in arc furnaces. Microsilica consists of extremely fine dust particles, which can be assumed to be on average 100 times smaller than the average size of a cement grain. For technical reasons, silica dust is delivered in a concentrated form as micro granules which are agglomerates of individual particles. Microsilica is a very important addition to tight concrete. Replacing 15% of cement with micro-silica increases the tightness of concrete several dozen times, which is difficult to achieve by other methods. In addition, the compression strength is increased by 20% and absorbability is reduced three times. However, the addition of microsilica is associated with a decrease in consistency, which makes the fresh concrete mix difficult to work with. This can be prevented by adding a superplasticizer. It is worth noting, however, that the superplasticizer cannot be used uncritically, especially in micro-silica concretes, due to its negative impact on strength.

PCC BakkiSilicon hf. with its registered office in Iceland, deals with the production of silicon-metal from one of the most advanced production facilities in the world, utilizing 100% geothermal energy sources.

Caustic soda lye 25% solution Sodium hydroxide (25% solution) is an inorganic chemical compound of the hydroxide group, belonging to the strongest alkali. In liquid form it is a colourless, odourless...
Composition
Alkali
CAS No.
1310-73-2
Superplastyfikator CP Superplastyfikator CP is the equivalent of Superplastyfikator CA40 FF in a solid form, i.e. the polycondensate of calcium salt of naphthalene sulfonic acids with...
Composition
Naphthalene derivatives
CAS No.
37293-74-6
Roflam F9 Roflam F9 is a specialized phosphate ester used as an additive flame retardant. The product is halogen-free, thus, it does not release toxic gases during the combustion...
Composition
Phosphate
CAS No.
68937-41-7

Roteor MChlorobenzeneROKAmina K40HC (Cocamidopropyl Betaine)Chemal EM-500Rozin 2MROKO® PROFESSIONAL VIX Universal antibacterial liquid
Assess the usefulness of information
4.3 (6)
Your rating
Share
All the above information related to the product are provided according to the best knowledge of the manufacturer and published in good faith. However, the manufacturer does not guarantee the information and contents of this document are complete and accurate, and shall not be liable for the results of using them. The user is obliged to verify and confirm the information and contents of this documentation on his/her own. The manufacturer reserves the right to change the content of this document at any time without stating reasons of such changes.
Send inquiry
Newsletter
Stay updated