Similarly to wind power, water power has been used by humans for a very long time. Continuously developed, it has achieved remarkable performance and has become greatly popular in some regions. Can it be the source of energy for the future? 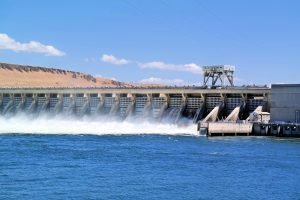 The energy derived from the motion of water in rivers was used already over a thousand years ago. The first mentions of the mills supplied with the energy of rivers date back to the first century AD. Since then, hydropower has come a long way and has developed tremendously. It is currently one of the most important branches of our planet’s entire energy sector and according to estimates it supplies up to 1/5 of all energy generated globally.

Nowadays, hydropower plants take many different forms. The most common are concrete dams. Their sizes vary considerably. One of examples is the dam on the Łomnica in Karpacz which is relatively small. On the other side of the scale there are engineering gems and mega-projects such as the Hoover Dam built on the Colorado River in the US or the Chinese Three Gorges Dam on the Yangtze River. In addition, many hydropower-related monuments have survived to this day, including mills such as the one in Ciechanowiec or Radków.

Hydropower plants are now among the most efficient facilities in the world. The most modern water turbines placed in dams are able to convert even 90% of the generated energy into electricity. For comparison, it is assumed that the efficiency of fossil fuels is only up to approx. 50%. Hydroelectric power plants are therefore a perfect combination of money savings thanks to the said energy efficiency and environmental savings as a result of being a renewable energy source.

Past, present and future

As we can see, hydropower may turn out to be one of the most promising sources of energy. Efficiency and environmental protection are aspects that should strengthen its position on the energy market. Some examples are Norway and New Zealand, which derive 99% and 75% of consumed energy from hydropower respectively. The PCC Group offers concrete additives that may prove very useful in the construction of new hydropower plants.

Check similar articles
More from the PCC Group
The wind and a windmill – a couple of the future
Read more
Energy from the Sun - the future of power?
Read more
Responsible Care Management Framework Certificate
Read more
Explore the world of chemistry with the PPC Group
Chemical curiosities and product innovations from the PCC Group
Soap production - natural and synthetic raw materials
Read more
Aerosols – what should you know about them?
Read more
Chemical industry in Poland. What changes are coming? [Update 2021]
Read more
Comments
Join the discussion
Cancel reply
There are no comments
Assess the usefulness of information
- (none)
Your rating
Newsletter
Stay updated