Salting is a very important stage in the technological process of cheese production. It determines the sensory characteristics of the final product (taste, hardness), but also ensures its durability and protects against microorganisms. The salting process involves placing the cheese in a solution called brine. 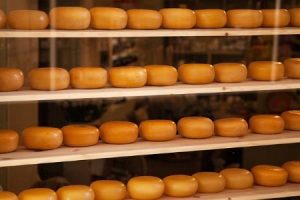 Parameters such as brine concentration, temperature and salting time are essential here. Particular attention should be paid to the purity of brines, as they can be a source of microbiological contamination of cheeses. How can we prevent it? An effective method is to carry out microbiological stabilization of the solution, which will prevent the proliferation of undesirable strains of bacteria.

What is microbiological stabilization of brine?

The gradual increase in the level of impurities in brine is one of the most frequently observed problems during the cheese production process. Over time, ingredients such as salt, proteins, fats, lactose and bacteria appear in brine. An increase in the number of microorganisms is very likely under these conditions, as the ingredients present in the brine are the ideal medium for them.

The microbiological stabilisation process involves the use of various methods (physical or chemical) to limit the development of undesirable microorganisms that may adversely affect the performance and quality of the finished product. In cheese-making, brine solutions are subjected to this process.

High salt content in brine (in the range of 16-19%), causes an increase in its osmotic pressure and a decrease in water activity. In combination with a low pH level (usually reaching 4.8-5.2, sometimes even 4.5) and a low brine temperature (12-15°C), this leads to microbiological stabilisation of the solution. Although the pH does not fall within the optimal range for microbial growth and is not conducive for microbial growth, certain groups of bacteria reproduce and develop in an unfavourable environment.  In addition to mould, this group of microbes also includes bacteria of the enterobacteriaceae family, which is capable of decomposing lactose. It causes premature bloating of cheeses.

Among the physical methods we should pay attention mainly to pasteurization and microfiltration. In both methods, physical factors are used to inhibit the development of microorganisms in brine.

This is the most effective physical method of brine stabilisation. It consists in subjecting the brine solution to increased temperature. The main problem in its application is the fact that high concentration of NaCl in brine that is subjected to this process leads to the destruction of Na+ and Cl- ions.  Ca²+ ions precipitate during the thermal process, which results in impoverishment of the brine composition.

This method consists in cleaning the brine solution from impurities with the use of a filtration system. It is effective, but a prerequisite for achieving an effect is the use of an appropriate pore size of the subdivision material. The smaller the pores, the higher the reduction of microbial levels, however, it triggers the necessity of more frequent washing of the membrane and changes the proportions in the organic fraction of the brine itself. The limited use of this method also results from high costs related to the purchase of membranes, which are expensive. The process of maintaining the membranes in an appropriate hygiene is also a disadvantage of this method.

Chemical methods of brine stabilization consist in introducing various chemical substances into the solution, which by changing brine parameters prevent bacteria development or completely eliminate it. For this purpose, additives such as NaCl, chlorine dioxide, colloidal silver and perhydrol can be used.

Introducing additional amounts of sodium chloride into the brine is the oldest and cheapest chemical method of stabilization, and at the same time guarantees a satisfactory microbiological effect. It should be borne in mind, however, that in brines subjected to this treatment the pH level increases, and the residues of chlorate compounds and their derivatives have a significant influence on the taste of the cheese.

It is a relatively cheap and effective chemical method. The stabilizing effect is observed when the active gas is introduced into the brine at the level of 6-10 ppm. However, such a concentration of chlorine dioxide results in a chlorine aftertaste in salted cheeses due to the reaction of chlorites used to synthesize the gas.

The use of silver to remove microbiological impurities from cheese brines is a safe and effective method. Unfortunately, economic factors are crucial here – the high price of silver excludes this method from industrial use.

How to increase the effectiveness of the peroxide method?

The effectiveness of the peroxide method can be significantly increased by combining perhydrol with another chemical substance – perlactic acid. Studies have shown that the effectiveness of a mixture of hydrogen peroxide and perlactic acid is almost 100 times higher than the use of peroxide only. This mixture is also highly effective against microbes that use lactic acid as a medium and cause subsequent cheese defects during the ripening process.

The perlactic acid is absorbed by the microbes exactly the same way as in the case of lactic acid. When perlactic acid enters a cell, its intracellular metabolic cycle is disturbed, and the cell itself begins to starve, its ability to divide is deactivated and, as a result, it dies.

Perlactic acid is safe for lactic fermentation bacteria, as such bacteria do not use lactic acid as an organic carbon source in the nutrition process. It reduces the activity of bacteriophages, which is an additional advantage in the production of ripening cheeses.

For microbiological stabilization it is recommended to use Hysepta M1-FG™, which is a solution containing active oxygen and perlactic acid. The product is manufactured exclusively from food grade substrates. The content of heavy metals and other possible process contaminants in the finished product is strictly controlled and therefore it can be used for direct contact with food.

In order to carry out the process of microbiological stabilization of the brine, the product should be added only once and two important parameters should be taken into account: buffer capacity and time left for the salinisation of the next batch.

The buffer capacity of the brine (in terms of pH) increases with time. For this reason, a sample of brine solution must be taken before stabilisation in order to determine the appropriate amount of HYSEPTA M1-FG™ to be introduced to achieve the target pH.

The minimum disinfection time must also be ensured before introducing another portion of cheese into the stabilised brine. Deactivation of fungi and viruses, including bacteriophages, takes about 15 minutes. Longer waiting time for the salinity of the next batch is not required, although it may be prolonged experimentally.

Other products dedicated to the food industry: https://www.products.pcc.eu/en/products/markets-and-applications/food-industry/

Check similar articles
More from the PCC Group
Membrane electrolysis vs. mercury technology
Read more
10 most important events in the field of chemistry in 2018
Read more
Dispersion paints – are they the best?
Read more
Comments
Join the discussion
Cancel reply
There are no comments
Assess the usefulness of information
- (none)
Your rating
Newsletter
Stay updated