Aerosols – what should you know about them?

Solid or liquid particles sprayed into a gaseous environment are commonly known as aerosols, and accompany us in many areas of life. They are used on a daily basis, often without even thinking about it. However, the sprays used in different branches of industry, as well as natural ones, are characterised by many different properties and for this reason it is worth learning more about them. 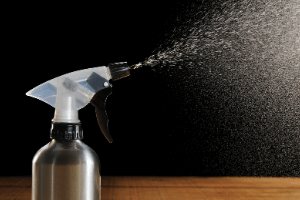 What are aerosols and how are they formed?

In accordance with the approved definition, an aerosol is a colloidal system in which gas is the dispersing medium. The colloidal particles of aerosols can be liquid (mist) or solid (dust or fume) particles. Although an aerosol might give the impression of a uniform cloud, it in fact it constitutes a mixture of different molecules with a highly variable dispersion level. Examples of this type of substance include mineral dusts, soot, sea salt aerosols and smog, the latter being particularly common in large cities.

One should be aware of the fact that aerosols are not only used on a large scale in different branches of industry, they are also responsible for the occurrence of important atmospheric phenomena, with a range of functions in the environment.

Aerosols and their impact on the environment

Atmospheric aerosols include all types of droplets and dusts suspended in the air. Atmospheric aerosols can be defined as liquid or solid particles with diameters of up to 10 micrometres (1 micrometre = 0.001 millimetre), which do not fall to the surface for a prolonged time but float in the mass of air.

The aerosols created from sea salt crystals form just one kind of such a mixture. Other atmospheric aerosols include:

For many years the aerosol effect has been observed in nature, which means that the clouds of dust and droplets suspended in the air to some extent balance out the effect of carbon dioxide on global warming. At the same time, aerosols are necessary to produce clouds, thus directly affecting the climate of our planet. The greater the volume of aerosols suspended in the air, the greater and denser are the clouds that can form in the atmosphere.

Research has shown that the clouds of gases, exhaust fumes, smoke and smog emitted by industrial areas contribute to the formation of heavy convection clouds. This type of structure, due to their specificity and ability to accumulate vapour, are responsible for locally intense rainfall, often resulting in local flooding.

Applications of aerosols in daily life

Aerosols, apart from having a profound impact on the environment, are also widely used in our daily lives. Their physical and chemical properties are commonly used by industry, where such mixtures form an important component of numerous products, assigned to many applications.

Salt water aerosols are used on a mass scale in the production of products for runny noses and sore throats. Analgesics, disinfecting agents, inhalation formulations and many other drugs are also available in a spray form. The advantage of using an aerosol is the precision and convenience of drug dosage.

Another field of application of aerosols is in the production of household chemicals, such as cleaning, polishing and disinfection agents. An atomizer is also one of the most commonly chosen methods to administer air freshening products.

In thinking about aerosols, most of us will surely imagine a perfume bottle or spray deodorant. Naturally, as these are the most common applications of aerosols in the cosmetics industry, but not only. Recent months have shown how convenient and safe it is to use hand disinfectants in the form of a transparent mist.

Aerosols are also used in the automotive industry, such as for the production of cleaning agents, windscreen de-icers and specialist rust removers. Many car cosmetics are also offered in this form. On the other hand, sprays are used in hydraulics as a method of lubricating installed components. One should not also forget such sprayed products as paints, varnishes and fitting foams, which are also manufactured on the basis of aerosols.

An aerosol with many applications

In the manufacture of each of the above preparations, an aerosol is required having the appropriate properties. However, some are highly versatile thanks to their characteristics, which allows them to be used in many industries. One such example is dimethyl ether, also known as DME. It is an organic chemical compound classified as an ether, with the form of a colourless gas.

DME has a characteristic odour and dissolves in water to a moderate degree. It is produced by the dehydration of methanol by means of synthesis from fuels or biomass, for example.

Dimethyl ether in liquefied form is often used as a solvent, which can be easily removed by evaporation. DME can be also used as a standalone fuel in diesel engines and in gas turbines. On the other hand, in the case of two- or four-stroke engines, dimethyl ether must be enriched with a 70% LPG mixture. Perhaps by about 2030 DME will become a widely used biofuel – its application is under consideration by the European Union.

Apart from that, dimethyl ether is already being used for the production of:

This makes it one of the most popular propellants and solvents used in modern industry.

What are the advantages of aerosols?

Aerosols are ubiquitous in industry, not only due to their physical and chemical properties but also their convenience and precise application. Another advantage of using hermetic packaging is also the prolonged shelf life of a product. Many containers of this type can be recycled. Considering such a wide range of advantages, the popularity of spray products comes as no surprise.

Check similar articles
More from the PCC Group
Soap production - natural and synthetic raw materials
Read more
Chemical industry in Poland. What changes are coming? [Update 2021]
Read more
10 most important events in the field of chemistry in 2020
Read more
Explore the world of green chemistry with the PCC Group
Read more on the GREENLINE™ blog
Liquid energy
Read more
The wind and a windmill – a couple of the future
Read more
Energy from the Sun - the future of power?
Read more
Comments
Join the discussion
Cancel reply
There are no comments
Assess the usefulness of information
- (none)
Your rating
Newsletter
Stay updated