Knowledge base Markets and applications

Currently, the starting material for the production of cellulose pulp, from which paper is made, are various types of fibrous plant materials obtained, among others, from coniferous and deciduous trees, but also from other plants, e.g. from flax, bamboo or cotton. 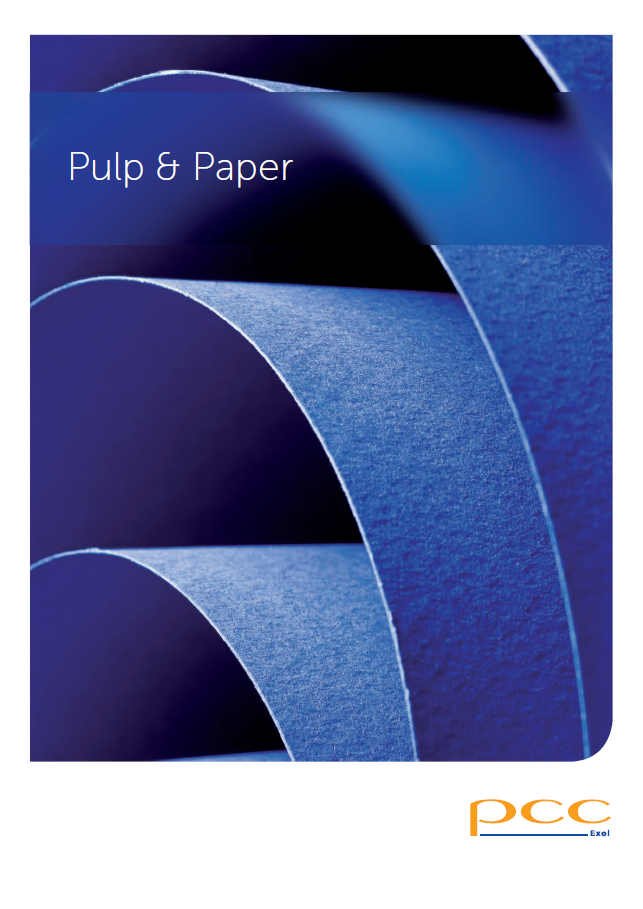 Paper has come a long way before it began to be manufactured in the form in which we now know it. Invented in China, from the very beginning it was an important medium of information, back then silk and linen fibers were used in its production.

The paper production process consists of several stages. In the first stage, the fragmentation and purification of the pulp take place, which may be of primary origin (wood) or secondary (waste paper). The main source of cellulose fibers is wood obtained in sawmills under several forms, e.g. as logs, wood chips or sawdust.

In the next stage, the fibrous material undergoes further processing, where it is converted into pulp, which is next processed into paper. The production of pulp can be held by mechanical or chemical methods. In the chemical pulping process, alkali (e.g., sodium hydroxide in the form of a lye or caustic soda) is usually used to remove the lignin that binds the fibers.

The use of defoamers at every stage of paper production is also crucial. Defoaming substances are used in the manufacturing process of all types of paper products. Foam is created by mixing gases with cellulose pulp and is retained in it due to the presence of surfactants. Products from the PCC Group’s offer can be successfully used for the removal of foam produced in the next stages of paper production. These include EO / PO block copolymers (ROKAmer) and a series of alkoxylated fatty alcohols (ROKAnol LP). Their high effectiveness in the elimination of foam and in the prevention of its formation enables an improvement in  the efficiency of subsequent technological steps.

The first of these is the kraft pulping process, also known as a sulfate process. Currently, it is the dominant technology – about 80% of the world production of pulp is processed using this method. Kraft pulping has become the most commonly used method due to several factors. Sulfate processed fibers have better durability compared to those obtained as a result of other available technologies. In addition, it can be used for all types of wood, and the process itself allows effective recovery of the chemical raw materials used.

The kraft process consists of combining wood chips with white liquor (it is an aqueous solution of sodium hydroxide and sodium sulfide). Under conditions of elevated pressure and temperature, this solution dissolves lignin, releasing cellulosic fibers. After completing the digestion reaction, a black liquor and cellulose pulp is obtained. The liquor contains dissolved organic substances that are recovered and can be used in the chemical process again. Lignin is removed from the mass in the process of oxygen delignification (in the presence of oxygen and sodium hydroxide). The material obtained in this way is bleached in order to achieve appropriate performance, such as strength, brightness and purity of the final product.

The second process of chemical digestion is the sulfite process. It consists of using an aqueous solution of sulfur dioxide in the presence of alkalis (e.g. calcium, magnesium, sodium and ammonium). The products obtained in this process are lighter and easier to whiten, however, they have much lower strength compared to the more frequently used sulfate pulping. The sulfite process also requires careful selection of wood raw material – this method is intolerant, for example for pine wood. The sulfite process compared to kraft pulping is more efficient, produces less unpleasant gases and also allows to obtain a very light pulp, which is easily leached. Unfortunately, due to the lower fiber quality, higher energy consumption and low recoverability of the chemical raw materials used in the process, sulfite technology has been replaced by the kraft process.

Groundwood pulp is obtained in the process of abrading wood on the stone at atmospheric pressure. The wood (from which the bark has been previously removed) is pulped using stone and then washed with water. The prepared mass is dried in hydrocyclones, from where it is transported to the compactor. In the next stage, dense wood mass is transported to the vat and the circulating water (filtrate) is recycled back to the pulp mill. During the production of pulp from processed wood, resinous substances are released, which easily agglomerate and create sediment on the grinder or internal walls of the pipelines. They often cause fouling of the surface of the stone, which worsens its abrasive properties. In order to remove these so-called “resin problems” various chemical agents are used. The most commonly used agent for this purpose are dispersants, which are designed to disperse deposits which are formed, facilitating their subsequent removal. The products of the ROKAcet and ROKAfenol series are excellent dispersants dedicated to the pulp and paper industry. In addition to their dispersing capabilities, these products can act as cleaning agents, emulsifiers and anti-electrostatic agents. ROKAfenols are perfect for the emulsification and stain removal processes of paper pulp and cellulose. While ROKAcet R40W is a product with a softening property that can be used in the textile, leather and paper industry.

The improvement of the SGW method is the thermomechanical pulping (TMP). In the TMP process, wood chips are initially washed to remove sand, stones and other hard impurities, then heated by steam under increased pressure, and further pulped in a disc mill. In the next stage, the mass is transported to the vat, where straightening and elimination of deformation of the fibers takes place. Finally, it is directed to the storage tank. In order to reduce the amount of harmful resins formed in the TMP process, similar chemicals are used as in the SGW process. The mass created in this way is most often used for the production of newsprint.

The CTMP process combines the TMP process together with the chemical impregnation of chips. In the first phase, they are washed and sieved and then impregnated. Depending on the type of wood, appropriate chemical solutions are used. Sodium sulfate is usually used for softwood, while alkaline peroxides are usually selected for hardwood. After the impregnation process is complete, the chips are heated and mixed with water, which loosens the lignin bonds and releases the fibers. The CTMP process allows to obtain clean pulp with sufficient strength and appropriate optical properties. CTMP is mainly used for the production of fibrous components of paper pulp, which can be used for the production of printing and hygiene papers.

The next stage of pulp processing is de-inking combined with mechanical removal of impurities. In the production of paper the most important parameter is the colour (the whiteness – in the case of printing paper). For this reason, the recycled paper must be thoroughly cleaned of the printing ink. The basic condition for its removal is the release of paint particles from the fibers and keeping them in a dispersed state. The finely divided ink particles are then separated from the fiber suspension. This is usually done on the basis of differences in physical properties of materials, such as specific weight of undesirable substances in comparison with fibers and water. Due to the fact that larger impurities, such as metal parts (staples), stones and sand, are already removed at the defibering stage, flotation processes are very often used in relation to fine impurities.

A frequent additional process is bleaching and is used in products requiring high purity, where yellowing is not desirable (e.g. papers for writing and printing). Sodium hypochlorite is a very popular substance used for bleaching. It can also be used for the production of carboxymethyl cellulose (CMC) from sawdust. Sodium hydroxide solution and chloroacetic acid (MCAA) are also used in this process. Bleaching involves the use of appropriate chemicals that are added directly to the dispersant to increase the whiteness of the mass. The type of fibers used and the desired final properties of the product have a great influence on the degree of pulp bleaching. The masses containing high-density materials are difficult to bleach and require high doses of chemicals. Sewage from bleaching installations before recycling requires a number of chemical agents that are intended to reduce their foaming, corrosiveness or reduce the ability to form scale. The PCC Group’s products, such as ROKAmers, are perfect for use in processes where the foaming of sewage and technological waters occurs. ROKAmer products are block copolymers of ethylene oxide and propylene. These products reduce the surface tension between liquid and air, at the same time improving the “drainage” of foam, which in effect causes its reduction.

After the dissolving, flotation and bleaching processes, the finished cellulose pulp is processed into paper pulp, which is then used for the production of paper. This process involves several stages:

Additives are used to produce paper products with special properties (so-called special papers) or to improve the paper process. The most popular additions are:

During the final stage, the mass is processed into a paper product using special machines. After the process is completed, the paper is rolled to protect it from damage and dirt. The PE-paper laminate is the most commonly used for packaging of the paper. Such packaging provides good protection against mechanical damage, dust and moisture. The great advantage of this type of packaging is also that it is completely recyclable.

ROKAcet R40W (PEG-40 Castor oil) ROKAcet R40W is a non-ionic surfactant belonging to the group of polyoxyethylene fatty acid esters of...
POLIkol 400 (PEG-8) POLIkol 400 belongs to the group of polyoxyethylene glycols (PEG with an average molecular weight of...
ROKAnol®LP2023 (Polyoxyalkylene glycol ether) ROKAnol® LP2023 belongs to the group of non-ionic surfactants of the type of alkoxylated fatty alcohols....
MCAA Flakes HP (Monochloroacetic acid) MCAA Flakes HP is a high purity product characterised by DCAA levels suitable for most applications where...
Rokrysol PZW Rokrysol PZW is an excellent dispersant of inorganic pigments in the paint and varnish industry. The...
ROKAmer 2600 (EO/PO block copolymer) ROKAmer 2600 belongs to the group of nonionic block copolymers of ethylene oxide and propylene oxide...
See all products in this category
Check similar articles
More from the PCC Group
Textile manufacture
See all products in this category

Textiles are fabrics, knitwear and other textiles made of yarn processed raw materials of vegetable, animal or synthetic origin.

Read more
Printing Inks
See all products in this category

Printing inks, unlike paints and varnish coatings, are applied to the surface in the form of a very thin layer, which, depending on the printing process, may have a thickness of 2 to 30 μm.

Read more
Transport
See all products in this category

Polyurethane materials are of great importance in the transport industry and can be used for the production of many elements improving the safety of travelers. They are characterized by great precision in the application, regardless of whether the surface is smooth or porous.